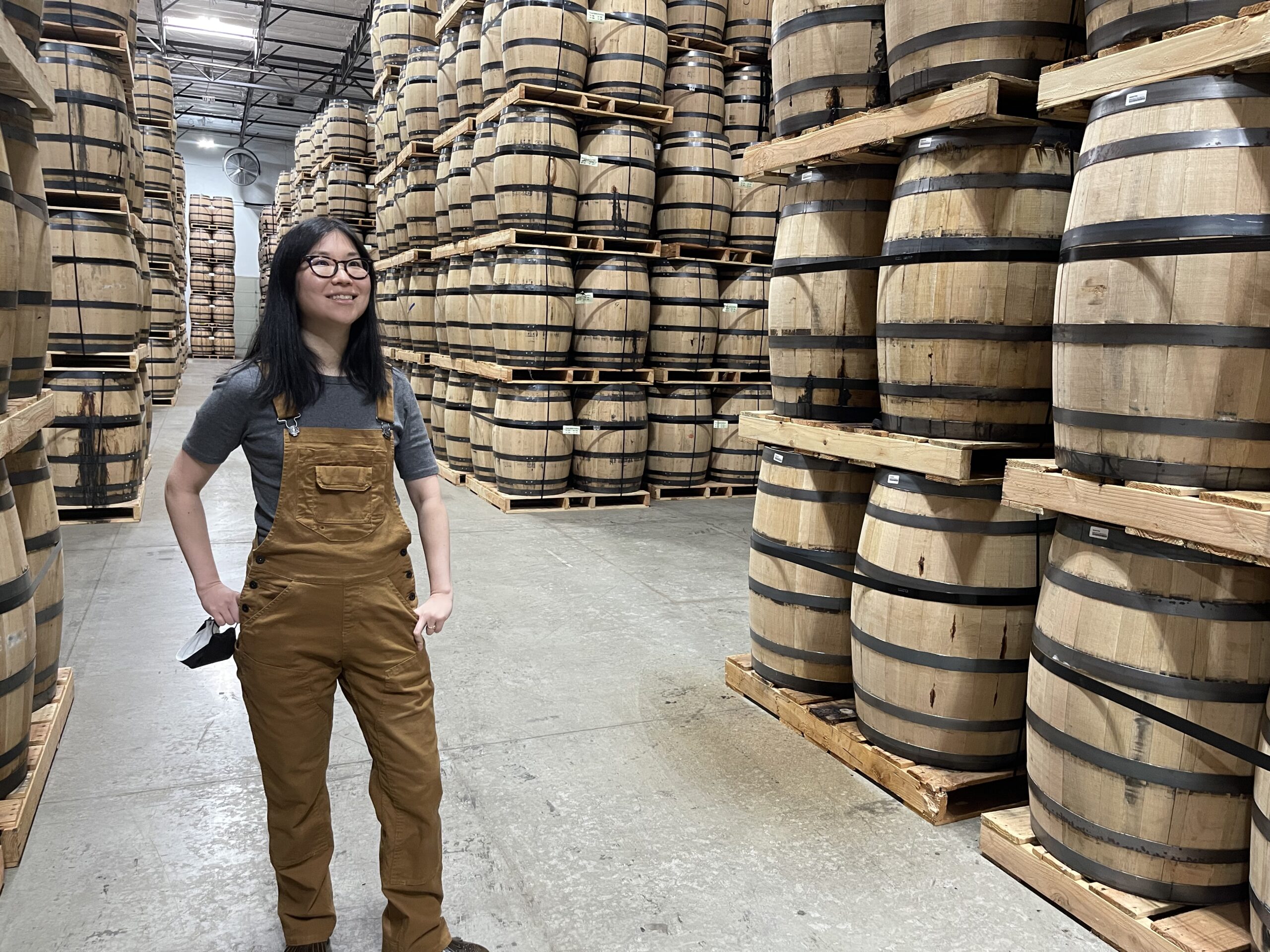 Craft Spirits Magazine, Vol. 4, Issue 1, March/April 2022 – Editor’s Note: This is the first in a series of essays written by interns and participants in the STEPUP Foundation, a spirits training and entrepreneurship program for underrepresented professionals in the spirits industry. Learn more at stepupinternship.org.

“I’m a misfit. Or at least that’s what I’ve always told myself. That dreadful feeling like you don’t quite belong? That you don’t have a place in your culture? That’s been me. Like a lot of immigrant kids, I grew up differently. Seaweed rice rolls (kimbab) at lunch in school while other kids ate ham and cheese? Working after hours at your parents’ store while other kids hung out? Not Korean enough for the Korean folks in my community, but not Canadian enough for the Canadians? Check, check and check.

What does one do when they don’t quite belong? Go into fashion, naturally. If I was going to be a misfit, the best kind of misfit to be is a cool one. Fashion gave me a way to express myself and stand out—but in a good way. Being a shy person, I discovered that a great outfit could provide a sense of confidence and spark some interesting conversations. I wanted to help others feel great about themselves, so I entered the fashion industry thinking it was a great way to express my creativity while getting to make something.

Over the course of my career in fashion, I found myself in situations that resembled “Mean Girls” meets “Devil Wears Prada.” There were some lovely folks, but more often than not, people were cut-throat and competitive. It was every person for themselves. If you were too good at what you did, you were perceived as a threat. As fast fashion took off, the world was beginning to view fashion as disposable. This ultimately translated to the people behind the clothes being treated as disposable. I was disposable. I started to feel like fashion wasn’t sustainable for the environment, the people who made the clothes or for myself. So, I took a step back and freelanced while I tried to find a new dream—a new me.

People always talk about following your passions, but finding a new passion to sink your heart into felt like an intimidating prospect. Where do you even start? Thankfully, I heard some great advice: Follow your interests and those interests will lead you to a passion. So, I did.

I’ve always been a taste-curious person. Long after a meal or beverage is gone, I find myself thinking about the flavors. If it wasn’t what I’d just tasted, I’d be thinking about what I was going to eat or make next. To me, being able to identify flavors is like solving a mystery. It feels like a superpower to be able to connect those dots between past memory and the present. But what can you do with a love of flavor? Aside from becoming a chef, I was a bit fuzzy on what to do next. It took a trip to China to sort that out.

Tea was part of my upbringing. I had always enjoyed it but didn’t know much about tea until a whistle-stop tour of East Asia caused me to take a closer look. I learned about preparing tea gongfu style in Beijing. I was hooked then and there. Squeezing in a bit more tea know-how before I left China, I stopped by Tianshan Tea City in Shanghai to dive deeper into the breadth of Chinese tea. By the time I returned to Brooklyn, I had the beginnings of a small tea collection and all the tools needed to prepare tea. What I didn’t know was this was just two of about 10,000 steps.

Tea is an intentional slowdown. The process of preparing and enjoying tea is meditative. Tea became a part of my daily ritual. I enrolled in a tea sommelier program taught by the Tea and Herbal Association of Canada, and through the course of eight modules, I learned about tea history, production methods, preparation, flavor pairing, identification and most importantly, how to taste tea. In the process of learning how to taste and analyze tea, it deepened my appreciation for whiskey. Like with tea, I was fascinated by how the same raw materials can taste completely different depending on how they are processed. You don’t rush whiskey—the appearance, aroma, taste and mouthfeel all take time to appreciate.

Then the pandemic changed everything overnight, for the best. Yes, something good came out of the pandemic. A whole host of online events made whiskey even more approachable. As a woman who enjoyed whiskey, I could join events without feeling like I didn’t belong. I joined events through Women Who Whiskey and The Bowery Collective, but I wanted to learn even more about whiskey. After a bit of research, I found Drammers, a global spirits club with a huge focus on whiskey.

The first few tastings with Drammers were a bit intimidating as people casually whipped out technical terms. But as unfamiliar terms became familiar, I found myself genuinely excited to learn more. These people were beyond passionate—they were head over heels for whiskey. I loved hearing members of the industry, from distillers, blenders, owners, authors and brand ambassadors, talk about the process of making spirits. Down the whiskey rabbit hole I went—I started to read books about whiskey, listen to podcasts and tune in to Instagram Live chats.

It’s so rare to hear about people loving what they do, so when the best in the industry would talk about the journey of continuous learning and how much they love what they do, I paid attention. I also discovered that the people who make whiskey, especially in craft spirits, can come from anywhere. There are former musicians, lawyers, architects, engineers and ballerinas. I started to wonder if I could add fashion designer to this list. I had been brainstorming ideas for getting my foot in the door when I saw a post on @WhiskeyWednesdays’s Instagram account about a very special bottle: Good Deeds Malt Whiskey.

I was intrigued because you don’t often hear about collaborations between more than two parties. I wondered why 10 different distilleries were collaborating and what they were raising money to support. Since I’m always one to dig a little deeper, I ended up on the STEPUP Foundation website. I was in a bit of shock to realize that this was a program created specifically for people just like me. With just three days to get an application in for the newly extended deadline, I knew I had to take my shot.

Finding out that I had been selected made me feel like my heart was going to burst out of my chest with excitement. I was on cloud nine, but I didn’t fully believe it. It wasn’t until I was at the ACSA’s Distillers’ Convention and Vendor Trade Show in December amongst you that it was real. At the convention, I was amazed to see people who genuinely care for one another; people who value and help one another as colleagues and not competition. I felt like the new kid at school entering a crowded lunchroom. Except I was invited to sit at your table. I felt like I was a valued part of this industry even before my year-long internship journey began. A few weeks in, my days have been filled with so much wonder and learning. I can only imagine what the year ahead will continue to show me.

There’s one thing I know so far—I’m not a misfit.”

Erin Lee is a Canadian transplant to Brooklyn, New York, and a certified tea sommelier who is transitioning into the distilling industry from a career in fashion. She is part of the STEPUP Foundation’s inaugural class of interns and is currently placed at Westward Whiskey in Portland, Oregon.
ShareTweetPin itShare
Previous
Yaki Udoumoh’s USA Today Feature: Bolstered by legacy, Black distillers push for diversity in industry: ‘You’re actually not alone’
Next
“Craft Spirits Podcast: Johnny Jeffery and John McKee of Good Deeds Spirits”