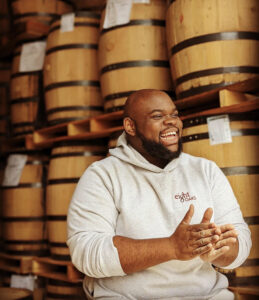 USA TODAY, April 2, 2022 – Yakntoro Udoumoh spent years trying to break into the alcohol distilling industry. He first tried to find work at a local rum distillery, but there were no spots open. Then, without the capital to launch a business on his own, he started bartending while waiting for an opportunity. After five years of bartending, Udoumoh is finally stepping into the distilling business, thanks to a program made to give people of color a chance in what experts told USA TODAY is an industry dominated by white men. Udoumoh, 27, is one of two inaugural interns in the STEPUP program, organized by the American Craft Spirits Association, a national nonprofit trade group with over 2,000 members.

Uncle Nearest, Du Nord, other Black distilleries push for diversity Udoumoh is part of a growing movement of Black distillers honoring the legacies of their ancestors and calling attention to systemic racism in distilling, or the process of making spirits such as gin, whiskey, rum, vodka, and brandy, often from grains or fruits. Among their calls to action is for industry leaders to recognize the historic contributions of Black distillers, many of them told USA TODAY.

After starting his internship in January at Eight Oaks Farm Distillery in New Tripoli, Pennsylvania, Udoumoh said he feels he’s walking in the footsteps of Black distillers before him who have been written out of the industry’s history.

“It’s easy to feel alone when you’re a person of color in this industry,” Udoumoh said. “…But there’s a sense of belonging that you feel when you learn this history, and there’s a comfort in knowing that there’s people who’ve done this before you, that you’re actually not alone.”

Margie A.S. Lehrman, CEO of American Craft Spirits Association, said it’s hard to say exactly how many distillery owners are Black. But she said she can only think of a handful, despite what she called a “deep history of distilling” in Black communities.

“We’re only beginning to understand and really talk just what role that community did play within the distilling industry,” Lehrman said.

FULL ARTICLE HERE
ShareTweetPin itShare
Previous
ACSA Elects All Women-Led Board of Directors
Next
Passion For Taste: A fashion designer’s journey to spirits