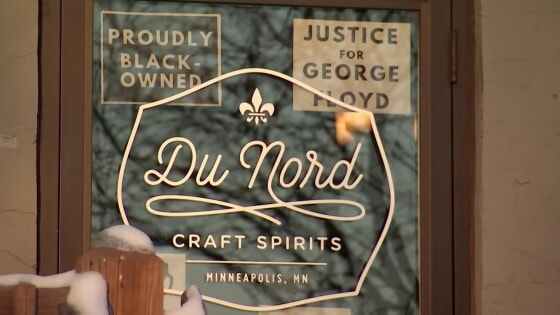 TODAY, April 23, 2022 – Thanks to Chris Montana, Du Nord Social Spirits is the first black-owned distillery in the United States. Montana and his wife, Shanelle, started the company together in his hometown Minneapolis, Minnesota. Montana told NBC News correspondent Kathy Park that he chose a meaningful location for the distillery.

“I used to walk past this space on my way to high school,” he said on Saturday TODAY. “As a kid, I didn’t have any concept of being a business owner. It’s like, what am I going to do that’s going to make enough money for me to support myself and just survive.”

At the time, Montana’s mom struggled to make ends meet. Soon, he found himself “couch surfing” in other people’s living rooms and “sleeping in folks’ basements” because he “didn’t have a home, per se.”

It wasn’t until one of Montana’s friend’s parents helped him out that he was able to finish school with a stable roof over his head.

After high school, Montana went on to pursue a career in law and politics. But although it caught his interest, it didn’t capture his heart like brewing beer did. So Montana decided to get a little help from distillers across the country, who taught him everything that he needed to know to start a company.

“I went to my first distiller’s conference. I was the only Black guy in the room, I was the only Black person in the room,” he said. At the distillery, Montana is sure to give credit to the people who helped him along the way. One spirit, the Cafe Frieda Coffee Liquer, is named for a high school theater teacher who always believed in him. On each label, he prints his motto: “Moake Good. Do Good.”

Since Du Nord Social Spirits took off, its staff has grown. Montana estimated that about half the employees are people of color.

“We make sure that women and people of color know that they are wanted, not just tolerated,” he said. “And then we build those good people.”

Business at the distillery did take a hit when people took to the streets to protest the May 2020 murder of George Floyd, who died in the area. During the unrest, part of the distillery went up in flames and glass was broken.

“It’s not pretty to look at, but it (was) our turning point,” he said.

Since then, the distillery has been restored and the company has only grown: Now, travelers can order some of Montana’s beverages if they’re flying on Delta Airlines.

“I had someone ask me the other day, like, ‘Do you feel like you’re a self-made man and you pulled yourself out of this situation?’ And the answer is absolutely not,” Montana said. “I was pulled out of a number of situations and continue to be pulled out of those situations by people around me who have invested so much in me.”

“And I’m happy for that,” he continued. “But I know what got me here.”

Watch the video here
ShareTweetPin itShare
Previous
APPLICATIONS NOW OPEN FOR 2023!
Next
ACSA Elects All Women-Led Board of Directors